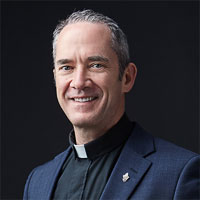 I am very interested in other cultures and in travel. I have lived in three continents (North and South America and Europe) and have also travelled to others including Asia and Africa and the Indian Ocean. Related to my cultural interests, I love languages and am fluent in English, French and Spanish. I find that knowing another language allows you to make wider connections in your critical thinking. My wife and I are both happy campers, enjoying meeting people from across this continent in some beautiful natural settings. Our baptismal covenant “to safeguard the integrity of God’s creation, and respect, sustain and renew the life of the Earth” is very important to me. I enjoy listening to and singing choral music. I am interested in how art (visual, musical, narrative and poetic) seems to by-pass the cerebral cortex and makes direct connections to the soul. Contemplative prayer feeds me.

We are all spiritual beings, created in love, and have a purpose in fulfilling God’s will in this world. We find meaning in our lives through exploring our own spirituality, discerning God’s will for us and then in carrying out God’s purpose for us through action. We are each called to be agents of God’s Kingdom in the here and now. I think the best way of exploring all of this is through forming and following a Rule of Life and I have been helped in this through my association with the Society of St. John the Evangelist (SSJE, Cambridge, Massachusetts.) Being a member of the Fellowship of St. John (FSJ), my rule of life includes daily prayer in the contemplative tradition, weekly Eucharist, keeping feasts and fasts, retreat times, including an annual retreat usually at SSJE, holistic heath (body, mind and spirit) and being engaged in mission and service.

I also believe that we are called to live as a community of believers in Christ, drawing strength from each other and being able to discern God’s will better as a community.

These principles are reflected in how I try to help others find their own spiritual depth and calling.

As chair of the Diocesan Partners in Mission (PIM) Committee I joined a team of clergy and lay in Niagara to plan the 2017 visit of a delegation from CAPA (the Council of Anglican Provinces of Africa.) Bishop Michael has long been involved with meetings with CAPA at various places in Africa. This was a chance for a delegation to see us. We organized a tour and presentation of the outreach ministries of St. Luke’s, Burlington, the Cathedral, including worship and lunch and finally a tour of our Missions to Seafarers facility. I learned, as I have learned before that we have first class staff and volunteers in this Diocese; that we are making a difference through much outreach ministry that is carried on in this diocese, that our work is appreciated and recognized, and that it is worthwhile to showcase our work nationally and internationally.

Once again, as chair of our Diocesan PIM Committee I was called upon to act as translator for the bishop of our Companion Diocese of Cuba and her husband during her visit to Canada and her time at General Synod in 2016. It was also the General Synod that finally passed first motion to change the marriage canon to allow equal marriage, a concept that isn’t even voiced in Cuba. The experience was, for me, both exhausting and exhilarating. I was able to witness the growing understanding of Bishop Griselda, her husband and two others of her delegation as the debate and voting was happening. I learned that as a diocese, we have a role in the national and international scene as exemplars in social justice.

I have served on two National Committees: Inter-Church Inter-Faith Relations Committee (ICIFRC) and Partners in mission (serving for 6 years and chairing it for the last 3.) While on ICIFRC we were engaged in several partnerships with other Churches and Faiths, but it was the Anglican Lutheran Dialogue that had traction at the time and, along with ICIFRC, I was also attending that National Dialogue working toward full communion with the Lutherans. I was overjoyed to be a member of General Synod in 2001, meeting in Waterloo when both Lutherans and Anglicans voted to enter into full communion. I have learned through this experience the importance and value of working in partnership with people of other Churches and other faiths. We have gifts to share and wisdom to teach and to learn in these partnerships. Likewise, through my work facilitating partnerships around the world through PIM I know that we are so enriched through building international partnerships.