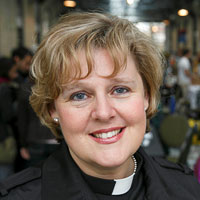 In addition to academic work, another area of interest is in vocal performance. After studying for two years in England - in London and then Oxford, on my return I was a professional member of the parish choir at St. John’s Elora for 2 and a half years from 1992-94 before proceeding to theological college in Toronto. More recently I have acted as a retreat leader and conference speaker at the following events:

I have one strong core principle of leadership: to listen and watch for where God is at work in the church and the world and to join in. All other elements of my leadership style flow from this core principle. As a spiritual discipline, I try to constantly listen – in prayer, through scripture, in the church and through culture - to discern God’s will in order to formulate direction and delineate a compelling vision. I enjoy casting that vision with imagination and energy. But leadership is more than vision, it’s working a plan with a critical path and achievable deliverables, so I’m also a strategic leader. I really enjoy bringing people and resources together to work toward a common goal. I have a genuine investment in all people as bearing the image of Christ and my relational and bridge-building skills are a keynote of my style. I am a natural team builder; I work with the people God has given me to use their skillsets in order to align vision and action.

It’s been said that the future belongs to those who can cope with complexity. We live in a culture of discontinuous change and its relationship with the church is also changing quickly. In this next season, we are called to be realistic about our challenges – but also about our opportunities – and that will call for strategic planning based on evidence and experience in ministry. I have been part of strategic planning processes both at Havergal College and at the Diocese of Toronto and have seen how effective their implementation can be for aligning purpose and resources with identified priorities in order to achieve the best outcomes. In his charge to Synod in 2015, Bishop Michael invited the church to “take a compass reading,” and examine the priorities for the near future. I believe these include the following:

Canon Missioner, Diocese of Toronto 2013 - present
In this role, I act as a catalyst and enabler of missional ministry in the Diocese of Toronto. I am a vision advocate, coach and mentor for existing church plants and pioneers and for short and medium term missions. I plan strategically for new churches and support extra-parochial ministries such as Chaplains. In addition, I fulfill a number of roles as Missioner throughout the Diocesan structure. These experiences have demonstrated to me the pressing need for Christians to understand, engage and respond to our secular culture from preparation for ministry to shaping ecclesial structures for mission, and in praxis through parish and extra-parochial ministries.

Senior Chaplain, Havergal College 2007-2017
My role was to engage with students, staff, faculty and alumnae in the school community through prayer, pastoral care and sacrament; to provide contextual discipleship programming; to create and implement the vision of a Chaplaincy department; to oversee and encourage theological students and Assistant Curates ministering in the school context. My experiences over those ten years were very valuable. I learned how to minister within a culture that is inoculated against faith and yet which expresses a deep spiritual longing; I learned to listen deeply and to respond as the Holy Spirit prompted in ways that made sense in that community and this resulted in the growth of the Chaplaincy Department and budget; in the renewal of the Religious Education curriculum and in strengthening the practice of daily Prayer throughout the school.

My National Responsibilities include: acting as Anglican representative for the National Ecumenical Dialogue between the Anglican Church of Canada and the United Church of Canada. I co-led the Inter-Diocesan Learning Community for Mission in the Diocese of Toronto which included 5 other Canadian Dioceses and I was a member of General Synod in 2016. I am a member of the Board of Threshold Ministries and the current National Team Leader for Fresh Expressions Canada.

Internationally, I represented the Diocese of Toronto throughout the Inter-Diocesan Learning community process in Liverpool, England from 2013-2016. This past September, for the second time, I was part of the International Fresh Expressions Learning Community in the UK.

I have learned that we share commonalities in the challenges of secularism and in the opportunities for reconnecting with our culture across Canada and with the international Body of Christ – and that national and international ministry partnerships are valuable learning tools for our future.